So much for the Blood Diamond-fueled war between Hollywood and the diamond industry.

The Diamond Information Center said 82 of Hollywood’s finest from film and television wore diamonds to the event.

Helen Mirren—who won Globes for best performance by an actress in a motion picture drama for The Queen and best performance by an actress in a miniseries or motion picture made for television for Elizabeth I—wore 3-carat kite-shaped diamond earrings set in white gold, a diamond bracelet, and a Tahitian pear-shaped Golden Diamond pendant set in micro pavé on a white-gold and diamond chain by Chopard.

Jolie—known for her philanthropic efforts in Africa as well as her A-list association with Brad Pitt—worked with fashion stylist Jen Rade to create a glamorous look that included a vintage-style uncut-diamond necklace, earrings and bangles set in 22-karat yellow gold by Bochic.

Best actress in a motion picture drama nominee Gyllenhaal chose vintage Van Cleef and Arpels jewelry consisting of a 1937 Ludo Hexagone bracelet with the company’s sapphire Mystery setting in the center with diamonds, a 1937 Pont oval sapphire bracelet with round-cut diamonds, and 1923 Pampilles earrings with sapphires and baguette-cut diamonds. All the pieces were mounted in platinum.

Diamond necklaces were worn by Heidi Klum, in a diamond and platinum choker with diamond-heart locket, valued at $1 million; and best actress in a motion picture drama nominee Kate Winslet, in a heart-shaped diamond pendant by Chopard.

In one of the more interesting accessory choices of the evening, Kyra Sedgwick, winner of the award for best performance by an actress in a television drama series for Closer, arrived on the red carpet with a “golden globe” already in hand.

She wore Piaget’s Golden Globe right-hand ring in 18-karat white gold with diamonds, which features an intricately faceted globe that reflects light as it dangles. 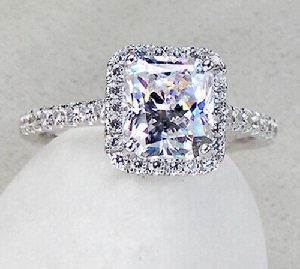